A Boppy was a must. We had one on our registry, but I was a little surprised at how pricey they were. And then the extra for a removable cover.

But when I found a pattern and directions for how to make one in Lotta Jansdotter’s Simple Sewing for Baby, I decided to make my own. The book provides a pattern and it’s really no more difficult than sewing around the kidney bean shape, turning it right side out, and stuffing it. I will say that instead of buying polyfill, I used the fake snow-fluff stuff that was on clearance right after Christmas. 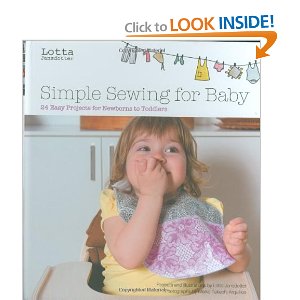 I also decided to make a removable cover for our boppy… because I’m certain Emily will get something on it! I used the tutorial from A Load of Craft. And to be honest, you could use her pattern to make the main part of your boppy if you wanted. During this part of the project, I realized that I haven’t put a zipper into something in a long time. Let’s just say I had to look up a tutorial and still take it out more than once! But it works…

Emily snoozing on her boppy