Make Your Own Ottoman

Right before Christmas, I ordered the cutest knitted ottoman for Emily’s room. My sister was there when I opened the box (much squealing and excitement on my part!) and said she didn’t have an ottoman for the nursery. Well, that’s uncomfortable!

So I made her one! Because what else are you going to do?

This was a really easy project, and a great scrap buster. This was right around the time that I was purging/cleaning/organizing our office, so I had committed to purging my scraps/random fabric by half. But I hate throwing away fabric. Problem solved!

This and one tub of fabric. That’s what I consolidated to!

What you’ll need:
*fabric
*LOTS of stuffing (I even used two extra pillows, plus all my scraps)

1.  Cut 6 squares. Mine measured 20″, because I used two decorative pillows as the top and bottom. I know, two fewer pillows in my house! You think that means I get to buy 2 more? But you could make yours any size that works for you.

2. Sew your cube using this cloth block tutorial from Make It and Love It. I skipped the step of clipping the corners, because with something so big, you’ve got some flexibility.

3. Stuff and stuff and stuff. Sit on it to press it down. Then stuff some more. It’s going to take lots more than you think, because you want it to be pretty solid. Hand sew the opening shut. 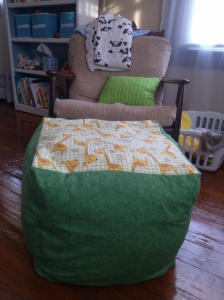 With all that fabric, your ottoman will be pretty heavy!

The little miss testing it out.