The first time I pulled out the tub, I just let Emily play with the beans. I had put all of the letters under the beans, and she was so surprised and delighted to find the letters. After she just played for awhile, I showed her how to use the funnel and transfer the beans back and forth. We practiced using the tongs, but she got frustrated pretty quickly. By the end of the two weeks, she was picking all sorts of things up with them though! 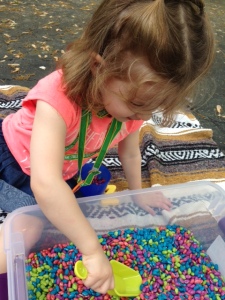 Idea from Hands On As We Grow:  Letter Scavenger Hunt

I saw this idea on Pinterest but the link was only to a picture (if you know what blog it came from, please pass it on so I can give them credit). I never did find the oil pans at Walmart but did at Auto Zone for about $10. I’m not sure how we’re going to attach it to the wall, but that’s Logan’s problem now…

For this game, I found Emily’s name in different types of letters. She has to match the letter she draws out of the bag to the mat. Then there’s another set of letters for her to order independently.

She LOVED this activity! Using the clothespins took some practice, but she’d match the letters and have me put them on the butterfly until she could do it independently.

I loved doing this tub with Emily! She got so excited about “school” time. We’d usually do two or three of the games at a time–a total of about 10-15 minutes. And the sensory tubs are so much easier to put together than busy books (I have to admit, I never made Emily a busy book. I always meant to get around to it and felt a little guilty that I didn’t. So finally I deleted all of the idea on my Pinterest boards. I feel so much better when I go through my Toddler Games board now. Silly, I know!).